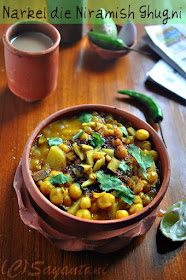 Ghugni or ghuguni is a very popular snack in Bengal, Orissa, Assam and Bihar. There are many versions of ghugni but the basic recipe is to cook boiled yellow peas with common Indian spice mix i.e. onion-ginger-tomato. In my initial days of blogging I had shared one healthy recipe of ghugni but what I dint understand then was before doling out the healthier version one needs to share the basic recipe first. I haven’t changed much yet and today what I am sharing again is the pure vegetarian version (sans onion-garlic) of it. The basic version most probably will have to wait for another year or so. In meantime you can go and check the stories I shared THERE.

We Bengalis have a peculiar habit of cooking a pure vegetarian version of all our favourite dishes. In our quest for doing so we even have many vegetarian versions of goat meat, fish and vegetables. Which we first offer to God and enjoy there after. This no onion-garlic ghugni recipe is also meant for the puja days. Which is often served with soft-puffy luchis for breakfast. Yes this is another great combinations after luchi-alu’r charchari that Bengalis die for. 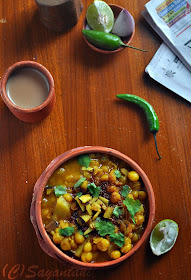 If on a sleepy morning you travel by the suburbs and look for some breakfast options, most probably you will find this in the roadside tea shops either to go with puffed rice or toasted white bread. People like my Hubby or my elder brother say that’s the best breakfast one could have. Am yet to agree with them as I just cant stand that mush of yellow peas and cubed potatoes, thickened with flour and topped with everything they can think of. I much prefer the homemade ones where the peas still retain their shape and beautifully soaks all the flavours and spices.

For me Maa makes the best ghugni in this world and I guess many of my friends will agree with me on this. Still people mention how they loved the ghugni Maa used to serve (she still does but her daughter’s friends are way to busy to drop in now a days) on holi or rakhi. Those days are gone but memories and tastes linger on in our hearts. 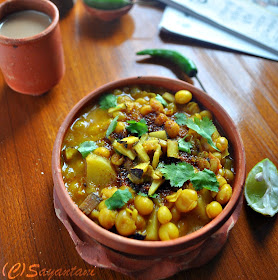 Method:
To boil the peas it needs to be soaked at least for 3-4 hours. Then pressure cook the peas with salt and turmeric on medium flame for 2 whistles. Let the steam escape on its own then open the lid. The peas should be cooked through but not mushy.
Here I must say that the cooking time depends on the quality of the peas. If you are doing this for the first time then start by cooking it only for one whistle. Let the steam escape and check. If it's undercooked then you can cook it further and this way you will get the idea.

Heat the oil in a kadhai or a big pan. Fry the chopped coconut pieces till golden. Drain and keep aside.

In the same oil add the whole clove, cinnamon, bay leaf. Once they splutter add the slited green chili and cumin seeds. When the aroma rises add the cubed potatoes and pinch of salt. Fry till the potatoes are light brown in colour. 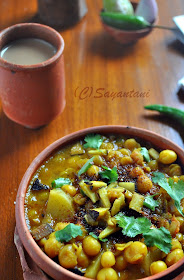 Pour in the mixed spices and keep frying on low for couple of minutes. The oil will start to separate at the sides. Add the boiled peas and turmeric in it and mix thoroughly.

Check the seasoning and let it come to a boil, then add the fried coconut pieces. Add more water if needed. The end dish should have thick gravy, so adjust the water accordingly.

Once the peas soak the flavours and the potatoes are cooked add the sugar and adjust the seasoning. 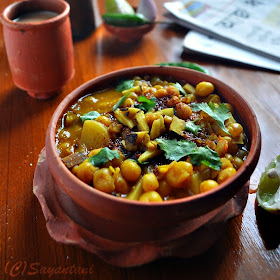 I love my coconut ghugni as it is with hot masala tea. But as I mentioned earlier it could be served with roti, toasted bread, luchi, paratha or puffed rice.

A Homemaker's Notes:
Donot over boil the peas as this will ruin the texture and taste of the Ghugni.

Similarly fresh green peas could be cooked. Though you do not have to pressure cook that. Just add fresh peas in the spice mix and cook.